Where:
When:
Bring down the lights Bring up the lights
Please wait while we find what you’re looking for... 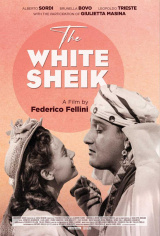 Provincial Leopoldo Trieste’s Roman honeymoon plans go sour when bride Brunella Bovo goes missing, even as his family (including an uncle, who’s “very high up in the Vatican”) is waiting in the hotel lobby for that first meeting,en route to a papal audience (along with 200 other couples). But super-fan Bovo’s first priority is to meet the “The White Sheik” (Alberto Sordi), fantasy hero of her beloved fumetti (comics, but illustrated with photographs). When Bovo finally arranges a tryst with her dream man, though, she finds he’s not what he’s cracked up to be.