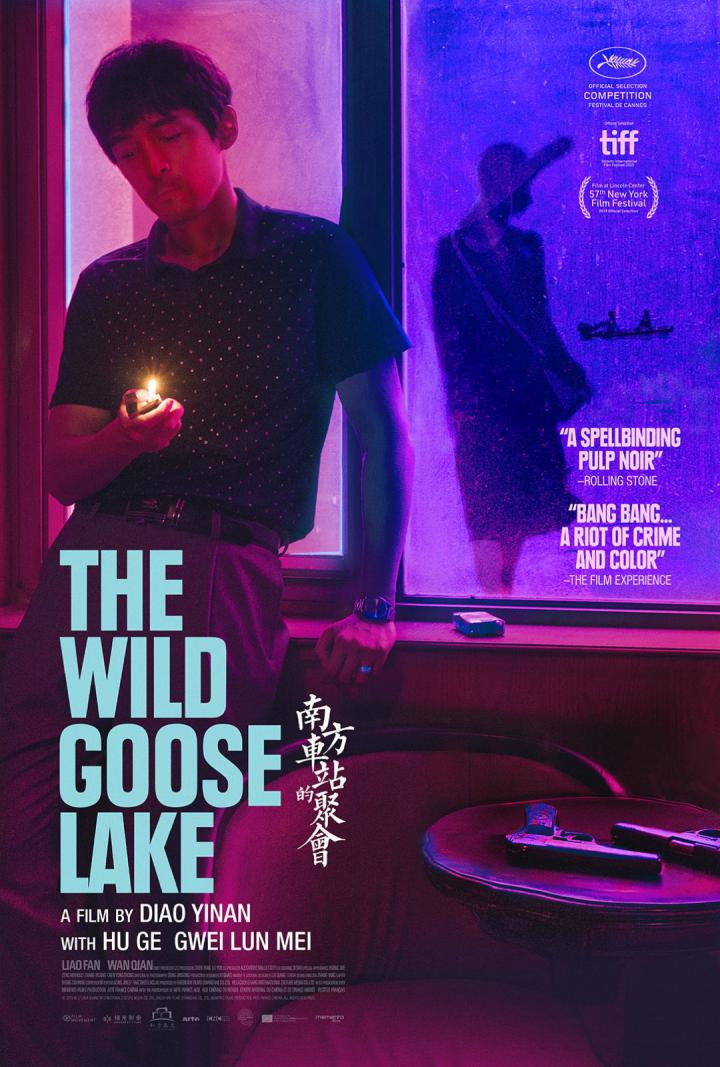 Watch This Film Online! Your viewing supports Laemmle Theatres. No code required. This link will take you away from Laemmle.com..
SEE MORE FILMS now playing at Laemmle's Virtual Cinema. 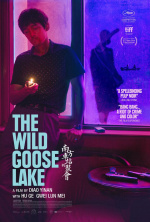 Watch This Film Online! Your viewing supports Laemmle Theatres. No code required. This link will take you away from Laemmle.com..
SEE MORE FILMS now playing at Laemmle's Virtual Cinema.

When smalltime mob leader Zhou Zenong (Chinese superstar Hu Ge) accidentally kills a cop, a dead-or-alive bounty is placed on his head, forcing him on the lam from both the police as well as dangerous gangsters out for the reward. Hiding out in China’s densely populated (and deeply divided) Wuhan province, Zhou becomes entangled with a beautiful, enigmatic woman, who has mysterious intentions of her own. Featuring gorgeous, neon-drenched cinematography and bursts of shocking, expertly choreographed action, THE WILD GOOSE LAKE is “spellbinding” (Rolling Stone), “brilliant" (Indiewire) and “downright Hitchcockian” (AV Club).

"Diao Yinan cements his status as a master filmmaker with another ingenious crime epic. The Wild Goose Lake is another assured, exhilarating tale of criminality and the havoc it wreaks on interpersonal connection, with everything impressive about its predecessor – attentive procedural detail, curious experiments with colour and shadow, action set pieces that’d make Michael Mann envious – raised to the Nth degree. There’s not a single false step in its two hours; every edit, every shot setup, every movement of the camera maximises the raw cinematic effect. There’s power in Diao’s more subdued passages, but when he really lets loose and the fists (or bullets, or strategically concealed booby-traps) start flying, this film’s greatness transforms from the kind that sneaks up on you to the kind that blows you away." ~ Charles Bramesco, Little White Lies

"Like a beautifully constructed puzzle box, The Wild Goose Lake various layers unfold in satisfying ways. With elegant violence, emotional richness and a complex yet coherent storyline, this is a rare bit of crime thriller treat that truly pays off. Above all, it’s a highly entertaining film that doesn’t for a moment eschew aesthetics, crafting a world of shadow and subterfuge that’s terrific. The Wild Goose Lake is a hoot, a Chinese crime thriller that proves Diao Yinan is a new master of dark, thrilling noir." ~ Jason Gorber, Slash Film

"Diao Yinan’s The Wild Goose Lake starts with a rainy night, a guy on the lam, a dame who sidles up to him and murmurs, “Got a light?” In other words, this Chinese gangland thriller kicks off in classic noir style, and gets progressively noirer and more nocturnal as it goes on. The fourth feature from writer-director Diao, who made a major impression with 2014’s investigative drama Black Coal, Thin Ice, this hyper-stylish manhunt drama laces slow-burn atmospherics with abrupt outbursts of staccato action, and boils down characterisation to the leanest of bare bones, making for minimalist existentialism in the style of Jean-Pierre Melville." ~ Jonathan Romney, Screen Daily

"In a movie where just about every scene contains some inventive technique or choice, I was most taken with the way Diao boldly abstracts some of his action: a close-quarters fight that unfolds entirely through associative close-ups; a stabbing conveyed through the scattering of bills; a cop discovering one of his colleagues is dead when a dollop of blood lands on his face. Some of these moments are downright Hitchcockian, giving us the implication of violence without always actually showing it." ~ A.A. Dowd, AV Club

"While Chinese director Diao Yinan’s The Wild Goose Lake hardly reconfigures the crime thriller afresh, it does pare it down to the essentials to exhilarating effect, progressively jettisoning the whys and wherefores of plot to focus on little more than two bodies moving through any number of ravishing, noirish spaces." ~
James Lattimer, Sight & Sound

"This enjoyable and elegantly styled noir thriller is ... awash with wonderful set-pieces and exquisite visual moments which skillfully echo China’s gilded past and leave us in no doubt of its contempory criminality and territory wars." ~ Meredith Taylor, Filmuforia

"Like the waters lapping up against the shores of its murky titular setting, Diao Yinan’s fugitive thriller The Wild Goose Lake (Nan Fang Che Zhan De Ju Hui) is a film that doesn’t hit you like a tidal wave as much as it gradually washes over you, leaving in its wake a series of memorable set-pieces and a dense, dark web of violence and fatality." ~ Jordan Mintzer, The Hollywood Reporter

"A dizzying, frenetic plunge into the winding and over-populated working-class districts of the city, Wild Goose Lake is an exceptional auteur film and noir. Each and every shot is well worth the detour in this sea of coup de force visuals (a very special mention goes to Director of Photography Jingsong Dong), on which the plot never lingers; instead, it takes them in as it twists and turns torrentially (as written by the filmmaker himself), blasting its way through a three-day period, broken up by some nice atmospheric moments where all the actions slows. It makes for a dazzling, labyrinthine journey through a criminal underworld. Here, violence plays an eternally cathartic role and sometimes bursts with black humour, making great use of the laconic and darkly romantic charisma of the two main actors and confirming the immense, fascinating and highly entertaining talent of Diao Yinan." ~ Fabien Lemercier, Cineuropa

"More even than on its strengths as an expertly directed piece of entertainment, Diao’s latest impresses for its scathing, and unexpected, indictment of societal ills—for how the filmmaker recognizes the extent to which the contours of a sordid genre film appropriately express realities of Chinese life." ~ Sam Mac, Slant Magazine

"...this film is fascinating because of how those genre thrills are complicated by these off-kilter, idiosyncratic formal choices that trigger not just a lurid dreamscape and uncomfortable humor... but also a vulnerability in the face of alienation and suffering. Watching Wild Goose Lake feels like watching a society crumble in real-time, the architecture itself decaying and being painted over while people’s baggage and experiences become more and more exposed...." ~ The Film Stage

This movie doesn’t recycle film noir conventions so much as contrive — with a genuine sense of discovery — to locate these conventions in a realistic contemporary context. The economic impoverishment of its principals is a key motivating factor; there’s a strong implication that it steered Zhou into ...

The Wild Goose Lake Get Tickets